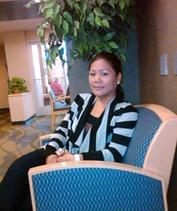 Jessica, born the second eldest of 7 was born to a mother and father who never married in one of the most remote places in the Philippines.   At an early age Jessica's mother left her and her six siblings.  Between the ages of 8 and 15 Jessica was the victim of incest, rape and beatings.  Lice infested, Jessica would be victimized and then tied in "The Sack" a burlap bag in a tree.  It was there she would find her solace and feel a sense of safety, remembering the songs the missionary pastors would come and teach the children in her village.  Jessica, never dreamed she would ever escape this life, but one day her grandmother found out what was happening to Jessica and intervened.  She took Jessica several hours away to her home and made arrangements for Jessica to fly (not speaking one word of English) to the United States to be with the mother who abandoned her now married to her 4th husband.  Jessica would be a babysitter to the woman's new family.  Lonely, afraid not knowing what would ever become of herself, Jessica began corresponding with a pastor she had read about that worked with children of gang-members, prostitutes, prisoners and children that were abandoned in the "projects" in a poor community in Long Branch, NJ.  After a year of corresponding one day the pastor sent Jessica a train ticket to travel from Washington State to New Jersey to meet the children.  When they did, the kids loved her.  Immediately Jessica and the children took to one another.  Jessica would teach them songs, teach them The Bible and help them with their school work, just like the missionaries had done with her as a child in the most southern part of the Philippines.

Jessica's time to leave came and she felt the children and pastor needed her, and she also needed them.  So, she told the pastor, "As long as you take care of God's people I will take care of you and the children. The day you stop is the day I will leave."

Jessica saw the need to help the children's mothers when they got out of drug rehab and prison, and they needed a bigger place for the children.  So, Jessica enrolled in Brookdale Community Collage and learned how to do medical coding and billing.  After being certified, Jessica began a welfare to work program (a community faith-based initiative) and began teaching those who came what she had learned.  Jessica received her funding from doctors that would pay the initiative to do the coding and billing and she would pay her students $10.00 to $12.00 per hour to get them off the streets and trained for working in insurance companies, doctors offices and hospital settings.  Whenever their was anything left over, Jessica would donate the money to build a church in the community just like the missionaries did in her village in the Philippines.

Eventually, Jessica got sick, the doctors could never find out what was wrong.  So, she decided without any health insurance the only way to get and stay healthy was to begin walking.  Eventually Jessica began running, then biking and then swimming ... Jessica would go on and become a world-class iron man triathlete.  100% of the proceeds she would raise would go to building water-wells in villages like hers across the planet and to provide clean drinking water for the children.  In all, it is estimated that Jessica was responsible for building nearly 20 water wells.

After working together all over the world for over sixteen years, eventually Jessica and the missionary pastor would marry.

Several years later on a cold January morning while on her way to work, Jessica was hit by an individual using a mobile device.  Her car was totaled and due to the accident Jessica would lose the baby she dreamed all her life of having (she was pregnant) and would never be able to carry a pregnancy again.  Jessica would undergo spinal surgery and is still in need of further surgeries to this very day and NEVER EVER complains EVER!

Jessica's husband Pastor Marti McGrail, is also a USNDAV who served two tours in Vietnam.  After begin exposed to Agent Orange, he would develop metastatic cancer and other life threatening complications.  Jessica not only took care of her pastor and husband, but she would also study to become a Pharmacy Tech, get her license and go to work to provide health insurance for the two of them in the Meridian Healthcare System.

Today, Jessica works in The Woman's Health Center at Riverview Medical Center, in addition to continuing her studies in hopes of one day seeing her dream come true to be a neonatal nurse and take care of those who have challenges that are against all odds.  Jessica and her husband Pastor Marti McGrail founded, built and pastor New Life Christian Church in Highlands, New Jersey.

The moment that exemplifies Jessica's life best is when she forgave those who hurt her in the most unspeakable ways known to man.  It was at that point that Jessica set the example that nothing is impossible for those who put others first.  Jessica's life is truly an inspiration to all of us.